Prime Ark Traveler is a sister plant to Freedom, released by the same great breeding program at the University of Arkansas. Flavor and size are similar to Freedom.  Traveler’s berries are more firm, better for transporting to farmers markets, and storing in the fridge.  The primocane crop on Traveler ripens about 2 weeks later than Freedom.    I would recommend growers that want the primocane crop make sure they are in zones 6-9.   Zone 5 won’t have enough heat in the fall (most years), unless you can slide a tunnel over the row to finish out the ripening cycle.  I have done this and harvested a decent crop from Traveler in October.
The floricane crop is about a week later than Freedom’s, but still earlier than any other floricane fruiting blackberry I’ve grown. Traveler also has the same sweetness as Freedom (worth mentioning twice, as the biggest issue with most blackberries is the amount of tartness). I have been growing blackberries for decades, and these two are by far the most consistently sweet blackberries I’ve ever harvested.  Osage would come in after them as next sweetest.
USDA hardiness zones 5b-9
(floricane hardy in zone 5b, but primocane crop in zone 5b
may need season extension to finish crop) 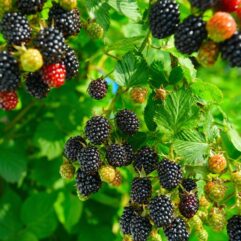 You're viewing: Prime Ark Traveler Organic Blackberry Plant $35.00
Add to cart
By continuing to browse the site you are agreeing to our use of cookies & our privacy policy.