Dawn Redwood is a tree that is know  as a living fossil. Thought to have gone extinct millions of years ago (it’s native range was the entire Northern hemisphere), it was “discovered” in 1944 by Chinese botanist Wang Zhan in what  is now the Sichuan and Hubei provinces. Here  was found a remote and isolated  population that had  persisted outside human depredation.   Known as Shui-sa (“water fir”) by the local inhabitants, scientists could not find that it was a know species. It was finally connected  to it’s fossil identity in 1946 by a professor at the Beijing Botanical Institute, and thus received it’s botanical  name Metasequoia glyptostroboides. The original area is now a preserve, and seedlings  have  been distributed across the globe, ensuring the survival of this once widespread genus. Interestingly, the  Dawn Redwood is well adapted to today’s climates across the northern hemisphere, and is also very tolerant to the air pollution that is negatively affecting other modern trees and forests.

This isn’t a berry plant, but it is a plant dear to my botanical heart. I sold many of these trees during my time at the local farm markets, and  people still check in with me to relate how tall and magnificent their  dawn  redwoods have become. This tree gets to about 60′ tall and maybe 30′ wide at the base (for a decades old tree), and is a narrow conifer with open and lacey texture. It is also deciduous like a bald  cypress, with needles turning a bronzed russet after frost. Capable of growing in both mesic  and dryer sites, it is very accommodating and not fussy at all.

Late freezes  can be an issue for it, but our valley is renowned for late freezes and they survived the May 9, 2020 freeze here with little damage. This is a nice tree that  fits into smaller lots, and offers a very different  texture and appearance. It is very sightly with snow draping its bare branches  in winter, and birds love to nest and sit in it. 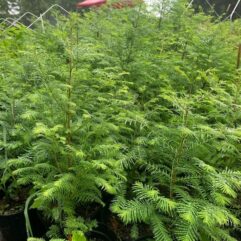 You're viewing: Organic Dawn Redwood tree $55.00
Add to cart
By continuing to browse the site you are agreeing to our use of cookies & our privacy policy.