This blackberry was released in 1998 by the USDA breeding program in Beltsville, MD.  Triple Crown has been an excellent blackberry, and was the only blackberry cultivar to produce some fruit after the 2007 April Freeze (even the wild blackberries were fruitless that year).  Triple Crown is a trailing blackberry, which means you have some options on how you would like to manage it.  I have one area that has just become a tangle of canes (12’x12′ roughly) and it produces a copious amount of fruit.  I hack the canes out when they are done fruiting, while trying to keep the new canes from rooting and expanding this fruit monster.  I also have a trellised area, where I can prune easily, and keep the canes tied up and neat.  My neighbors have one that they train along their porches privacy lattice, allowing them to pluck berries as they relax in the shade cast by the canes.   One plant has produced a good 22# of fruit, the berries being medium to large sized (better pruning gives consistently larger berries) with sweet flavor.  Triple Crown is also thorn-free, and ripens a bit after Apache has started producing.  It also has a longer harvest period than Apache, with 5 year old plants producing for over 6 weeks when adequate moisture and heat are present.
USDA Hardiness zones 5-11
Update on Triple Crown for 2012 growing season:
Triple Crown once again gave us nearly a full crop of berries, despite enduring two nights of 20F in mid-April (Triple Crown blooms were still tight-green, while all others were full open).  Berry size was not as large as 2011, and I lost about 20% of the first ripening berries to sunscald (which could have been avoided if I had thrown 30% shade fabric over the canes, which I did for the remainder of the harvest period).  We would have had very few blackberries if not for Triple Crown, which is why it dominates our plantings.  (See Natchez update for another promising, freeze-fighting cultivar) 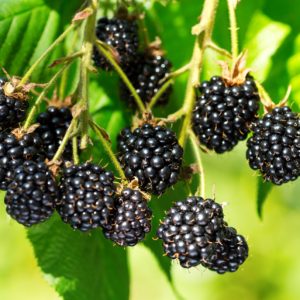 You're viewing: Triple Crown Blackberry 2 gallon
$35.00 6 in stockAdd to cart