Rubel is an heirloom cultivar named by Elizabeth Coleman White around 1905-1906.  The original plant was found growing wild in the New Jersey Pine Barrens.  It was named after Rube Leek, the pine-barrens man who found it.  According to the story,  Ms.  White didn’t want to name the blueberry “Leek”, and of course the name “Rube” back then was inappropriate in some circles.  But Rubel turned out to have staying power, and it is the progenitor of many modern cultivars.   Rubel’s berries are small, packed with sweetness, and copious.  (It is interesting to note that 100 years ago Rubel’s berries were viewed as large.)  The mature bush yields between 8-10# of berries.    Rubel REALLY likes the soil-less method, preferring high organic and acidic media around the roots.  It is a late, mid-season cultivar.  Rubel ripens along with Elizabeth or Jersey.  It grows  5′ to 6′ tall and 3′ wide, with vibrant, reddish fall leaf color.  If you are looking for a blueberry that has the flavor and look of what blueberries were 100 years ago, in the wilds of  the Jersey Pine Barrens, then Rubel is one to try.  It is still planted for production today, and has outlasted all its contemporaries, and many of its descendants.
USDA hardiness zones 4a to 7 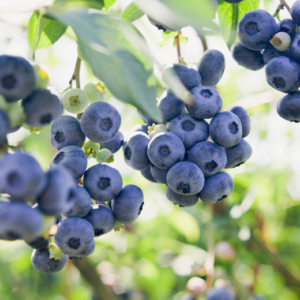